It never ceases to amaze us the lengths some people will go to raise much-needed funds for Sandwell Advocacy.  One such feat was recently completed by Gavin Bevan who completed a sponsored run over the Yorkshire Three Peaks.

We are really grateful to Gavin, and those who sponsored him, for raising vital funds towards the work we do supporting people to have a voice throughout Sandwell.

This is Gavin’s story:

“Waking up to the first frost of the year, in my tent, was certainly not a great start. (Especially as I left my inflatable mattress at home and was sleeping on the floor). After a hearty breakfast of porridge and banana, I set off at 8am and headed for my first peak, Pen-y-ghent.

Within 10 minutes, I was already running up the wrong track and only realised when I saw the church, I should have been passing, was on the opposite side of the river. Whoops.

The climb to Pen-y-ghent was steady, as there were quite a few walkers out, but with a bit of weaving I was up and over the first peak within an hour.

The sun was out and it looked like it was going to be a glorious day, but with a bit of a breeze. The 12 miles between Pen-y-ghent and Whernside flew by without many hiccups… (A berry protein shot that I took with me turned out to be fizzy and nearly came up as quick as it went down. Also my phone packed in so I had no music and was left alone with my thoughts – NOOOOO!)

After admiring the fantastic views as I passed the Ribblehead Viaduct, I started the steady climb up Whernside. My legs started to tighten up on the ascent, so a bit of one leg balancing half way up a mountain was trickier than I anticipated and nearly fell back down. I continued and was off Whernside and on my way to Ingleborough within 3hours and 35 minutes.

I got to Ingleborough in decent time, but now my legs were starting to tire. Then I saw it. The Diversion sign. The path we now had to take was up the face of Ingleborough. It started steady, but was soon having me climb, what felt like, a near vertical slope of mud. By this point all I could do was put 1 foot in front of the other. If I had stopped I do not think I would have been able to continue. I eventually reached the top and I was off running again, as I passed across the ridgeline of Ingleborough, the wind from the valley was blowing up and over and nearly blew me off my feet a couple of times.

All 3 Peaks were now completed and all I had was the 5 miles to cover off the mountain back to the camp site. With a lot of personal encouragement and self-motivation, I kept my legs moving. I was stilling passing walkers all the way back to Horton in ribblesdale. I finally completed the 26.54 mile circular route in 6:12:45 a personal achievement I was able to experience whilst raising money for such a worthy cause as Sandwell Advocacy. I wish you all the best for the future and may your Valuable, selfless work continue. 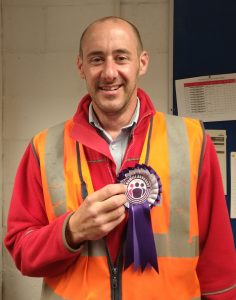